US GDP continued its long expansion in the third quarter of 2018 at a pace that was only slightly slower than earlier in the year. According to the advance estimate from the Bureau of Economic Analysis, GDP grew at a 3.5 percent annual rate in Q3, compared to 4.2 percent in Q2. The advance estimate, which is based on incomplete data, is subject to revision. Based on past experience, the second estimate, which will be released one month from now, may be about half a percentage point higher or lower than the advance figure.

But the real news from Friday’s data release concerns the structure of growth, which has changed dramatically for the worse, rather than its still-respectable overall pace. The following chart shows the contrast between the structure of growth in Q2 and Q3. The bars show how much of the total growth in each quarter can be traced to changes in each sector of the economy. 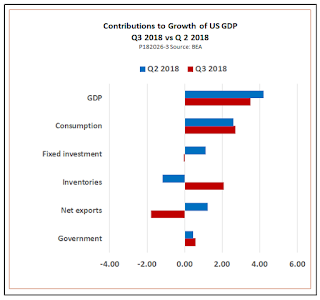 In both quarters, consumption and government spending contributed positively to GDP growth, although not quite so strongly in Q3 as in Q2. Changes in other sectors of the economy were more dramatic.

In Q2, fixed investment in factories, business equipment, and housing was a bright spot, contributing 1.1 percentage points, or more than a quarter of GDP growth. In Q3, contributions from fixed investment disappeared, even turning slightly negative. This change can be traced to weakness in investments in business structures, housing, and transportation equipment.

Inventory investment changed in exactly the opposite direction. In Q2, inventories made a negative contribution to growth, but in Q3, swelling stocks of unsold products accounted for 2.09 percentage points of the quarter’s GDP growth — two thirds of all net growth. Rising inventories can be a sign of economic health if they represent the actions of companies that are building inventories to meet expected growth of sales in the future. However, in this case, they more likely represent unplanned accumulation of goods that turned out to be harder to sell than companies thought they would be. If so, producers are likely to cut back output in the fourth quarter to bring inventories back into line.

The bottom line: Growth does not look too bad at the moment, but in the long run, you can’t build a strong economy on consumer and government spending alone. You need investment and you need exports. If those sectors don’t contribute more in the rest of the year, expect overall GDP growth to turn sharply lower.