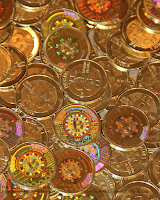 Bitcoin mining, as the New York Times’s Nathanial Popper points out, is a voracious consumer of energy, perhaps as much as Denmark. For good reasons, that has environmentalists worried. What is to be done?

First, why is Bitcoin mining so energy-intensive? It’s pretty simple, as Popper explains. Nothing has value unless it is scarce. To keep Bitcoin scarce, you limit the number created. That part is easy—but who gets the new Bitcoins that trickle out of the master spigot at a rate of a dozen or so per hour? The answer is to give them to whoever can demonstrate “proof of work” by solving complex computational problems with ginormous, energy-sucking computers. According Peter Van Valkenburgh of Coin Center, that’s a good thing:


Because of the costs, we know the only people participating are serious, that they are economically invested. That creates the incentives for cooperation.

OK, I get it. But why not find some less environmentally harmful way for people to demonstrate they’re serious? For example, what if we could find something that is scarce and is, at the same time, both an economic input and an economic output? Call it “Factor X.” Using lots of Factor X would show you are serious, but at the same time, it would be a social good—not a social bad like burning energy. Bitcoin would stay scarce, but it would now be a harmless by-product of Factor X.

So, is there such a thing as Factor X? Of course! Labor! Economists tend to take a silly, one-sided view that sees labor as an input only. They talk worshipfully of “productivity,” as if the use of labor were something we should try to minimize. Yet, everyone else knows that labor—in the form of “jobs”— is really an output, something that we should try to maximize. Certainly, all of our recent Presidents seem to have known this:
Bitcoin analyst Marc Bevand knows this, too. Popper quotes him as saying,


Labeling Bitcoin mining as a “waste” is a failure to look at the big picture. The jobs alone are a direct, measurable and positive impact that Bitcoin has already made on the economy.

Here’s my modest proposal, then. Keep Bitcoin as it is, continue to require miners to perform arduous calculations—but require that the calculations be performed only using an abacus. Keeps Bitcoins scarce. Keeps the environment clean. Creates lots of jobs. A win-win-win solution.

Reposted from NiskanenCenter.org, with a hat-tip to Jonathan Swift.