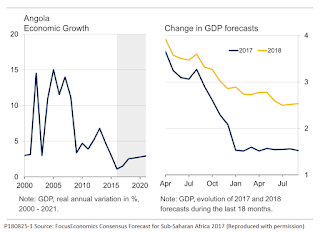 Angola’s per capita GDP, estimated at purchasing power parity, was $7,344 in 2016, ahead of Nigeria, the region’s largest oil exporter, although barely half that of South Africa. However, the country’s social indicators are low for a country of its level of GDP. One of the best summary measures is the Social Progress Index (SPI), which combines scores of health, living standards, education, personal securities, and personal freedoms. The following chart compares the SPI to GDP per capita for 131 countries around the world. Although, on average, social indicators tend to improve as GDP per capita rises, Angola’s SPI falls far below the trendline. 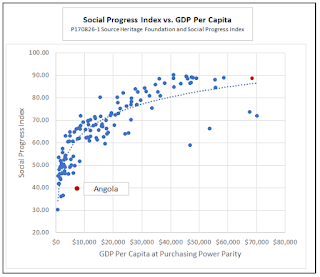 The combination of poor social indicators combined with resource wealth is often called the “curse of riches.” Oil exporting countries, Angola included, are especially vulnerable. Extensive corruption is another characteristic of the curse of riches. Angola ranks a dismal 164th out of 176 countries on Transparency International’s Corruption Perception Index.

There is not a lot here to be optimistic about, but if we try hard to find good news, there is a little. For example, in response to urging from the IMF and the World Bank, the Angolan government has been successful in reducing fuel price subsidies. Development experts frown on fuel price subsidies, common in oil exporting countries, because they place a huge drain on government budgets while benefits go primarily to upper-income households. Before the reforms, Angola spent almost as much on fuel subsidies as on education. Progress against inflation is another promising sign. Inflation soared to over 40 percent at the end of 2016, but it has fallen sharply since then, and is expected to fall to 20 percent by the end of this year.

In short, Angola’s new president faces major challenges. Freeing the country from the curse of riches will not be easy, nor will freeing his own party from the grip of corrupt elites, especially since former president dos Santos retains considerable influence. In the best case, President Lourenço will seek reconciliation with the political opposition and listen to advice from technocrats in his own central bank and international agencies. If not, look for continued economic stagnation.

Reposted with permission from TalkMarkets.com
Posted by Ed Dolan at 4:41 AM