As Exports Soar, US Economy Closes in on Fed's Targets 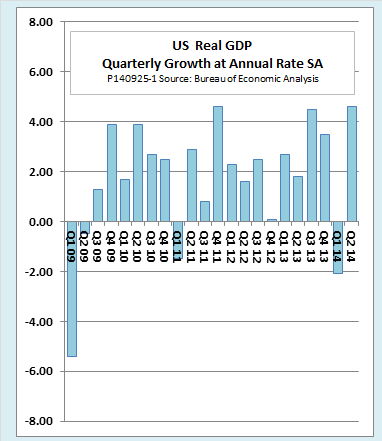 Revised data released today by the Bureau of Economic Analysis show that the US economy grew at a 4.6 percent annual rate in the second quarter of 2014, even faster than the 4.2 percent previously
estimated. That was the most rapid quarterly growth since Q4 2010.
Much of the upward revision was due to the growth of exports, which also turned in their best performance in four years. The strong performance of the export sector is especially noteworthy in view of slow growth or recession in many US trading partners and the strong dollar, which had not yet begun to weaken in Q2. The BEA also made an upward revision, but not as large, to the growth of imports.
Personal consumption expenditures also grew faster than previously reported, with durable goods accounting for more than half of total growth for that sector. Fixed investment was also significantly stronger than previously reported. The contribution to GDP growth from government consumption expenditures and gross investment was a little stronger than in the second estimate. All of the growth of the government sector came at the state and local levels. The contribution to growth from the federal level was negative, as it has been in 11 of the past 12 quarters. >>>Read more

Follow this link to view or download a slideshow with additional charts of the latest GDP data
Posted by Ed Dolan at 8:09 AM