Despite widespread support among economists of all political persuasions, polling shows public attitudes toward putting a price on carbon emissions to be lukewarm, whether you call it a tax, a fee, a user charge or anything else. A Hill+Knowlton survey found that although 81 percent of Americans respond positively when asked if they favor government action to limit carbon emissions, support falls to 56 percent when they are asked whether they favor a carbon tax.


Conservatives are not the only ones who are skeptical. According to a YouGov Blue poll, people who identify as Democrats have greater-overall support for climate action than do Republicans, but even they prefer an approach that emphasizes public investment and regulation over any kind of carbon tax or fee. A Politifact analysis of climate policies as stated on campaign websites found that only six of the 21 Democratic candidates who participated in the June and July debates offered explicit support for a carbon tax.

Nor is aversion to carbon taxes limited to the United States. A comprehensive cross-national review of climate policy opinion by Stefano Carattini, Maria Carvalho, and Sam Fankhauser, “Overcoming Public Resistance to Carbon Taxes,” (Carattini) finds similar attitudes both in the United States and abroad.

In what follows, I will try to address the issues that these polling data raise for economists, myself included, who see carbon taxes as “obviously” the best tool of climate policy. Why is it that so many members of the public are skeptical, even when they strongly favor climate action? How can carbon tax backers improve their communication strategies?

“A carbon tax will hurt the poor”

One frequent objection to carbon taxes is the fear that they would hurt the poor. Interestingly, though, in Carattini’s survey of international polling that was not the top source of resistance to carbon taxes. In an earlier piece on carbon taxes and the poor, I suggested two possible reasons.

First, the concern that a carbon tax will hurt the poor is less often voiced by those who have real concerns about the future of the planet than by those who do not. It is a favorite makeweight to self-interested arguments made by coal and oil producers and others who benefit from the status quo. They love to warn that a carbon tax would hurt the poor, hurt jobs, hurt growth — all without regard for how much uncontrolled global warming itself would do so.

Second, when voiced sincerely, “It will hurt the poor” is one of the most easily answered objections. Although poor households do spend more on gasoline and electricity as a percentage of their incomes, their incomes are very low. On the whole, most of the burden of a carbon tax would fall on higher-income households. Rebating even 10 to 20 percent of tax revenue to the poor would be enough to hold them harmless.

However, as Carattini and his team found, many people do not trust the government to keep its promises. Would carbon tax revenue really be disbursed to those who need it, or would the government impose taxes and then renege on the rebates? To address that concern, some advocates urge that the government should pledge to rebate all of the revenue to the public. The carbon-fee-and-dividend proposal from the nonpartisan Citizens’ Climate Lobby is one example. The more conservative Climate Leadership Council makes a similar proposal.

Communications issue: Advocates should emphasize realistic, visible, and binding commitments to ensure that low-income households will be able to manage the impact of a carbon tax.

“A carbon tax is just a nudge”

Polls also indicate that many people doubt the efficacy of a carbon tax. They see such a tax as “just a nudge” that would have no fundamental effect on behavior.

Economists disagree. Studies universally find that an increase in prices of carbon-based fuels or other carbon-based goods leads to decreases in consumption. The disagreements are not about whether price has an effect on demand for gasoline, electricity, and other carbon-based goods and services, but about how large the effect is and how quickly it operates. The economist’s term for the sensitivity of quantities purchased to changes in price is elasticity of demand. This source provides a good discussion of the technicalities involved in estimating the price elasticities relevant to a carbon tax.

Public skepticism about the effects of carbon taxes may stem in part from a failure to recognize that prices affect demand in many ways. People may think, “Even if gasoline goes up to $5 a gallon, I still have to get to work. The higher price won’t change that, it will just take a big bite out of my paycheck.”

Over time, however, there are more subtle ways to adjust to higher prices than just staying home from work. Energy prices affect where people live, how compact or sprawled out their cities are, how large their houses are, and how well insulated. They affect technical choices made by manufacturers of cars, air conditioners, refrigerators, and airliners. They affect research efforts of corporations and universities. They affect government choices regarding public transportation and other infrastructure development.

There are thousands of pressure points at which prices affect demand, many of which are invisible to ordinary consumers. When all of them are put together, the relation of prices to consumption can be quite dramatic, as illustrated by the following figure, which shows differences in fuel prices and energy used in transportation in various large economies. Higher prices drive down consumption, as economists expect. 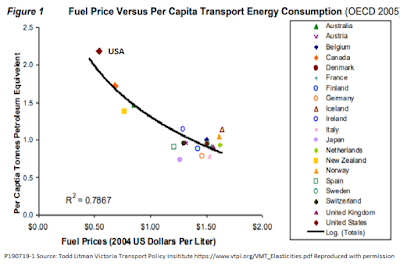 Communication issue: Econometric studies of elasticity are important to economists, but are unlikely to convince many people. Better to look for anecdotal evidence, simple charts, cross-country comparisons, and other easily understood illustrations of the effectiveness of price changes in reducing consumption.

“Marching as to war”

The Green New Deal calls for “a new national, social, industrial, and economic mobilization on a scale not seen since World War II.” This urgent call to arms says nothing about a carbon tax. After all, wartime mobilizations do not rely on relative price changes. They rely on orders given and orders obeyed.

Speaking to the Washington Examiner, Saikat Chakrabarti, who at the time was chief of staff for GND architect Alexandria Ocasio-Cortez, put it this way:

Carbon pricing is a tiny part of the Green New Deal. … The climate debate should be about how many windmills, solar farms, and electric vehicles we can build.

That attitude would be all well and good if government officials knew exactly which orders they should issue, but they do not. To take one example, it is fine to say that we need more wind turbines and solar panels, but just building more will hit diminishing returns without better storage technologies. The problem is, no one knows which kinds of storage can best be scaled up to meet national needs. What one firm can make work may or may not beat out its competitors.

For another example, consider electric cars. Yes, the government can offer tax rebates for purchases of electric cars and could even set quantitative targets for manufacturers. By encouraging high-volume output of electric cars, such subsidies might lead to a reduction in production costs. But mandates are a costly emissions-reduction tool, in part because the degree to which electric cars reduce emissions varies greatly among regions of the country.

Rather than subsidies or regulations that apply nationwide, it would make more sense to use a carbon tax to raise the price of electricity derived from fossil fuels while keeping green power costs low. Electric car ownership would grow fastest in the regions, especially the West, where it now does the most good. Later, electrics would spread to other areas as the tax induced utilities in the East to switch to cleaner fuels.

Finally, while speaking of cars, consider another point. For many years, the federal government has used CAFE standards to compel automakers to increase average fuel economy. However, those fuel economy standards have an unintended consequence. They make it more likely that you will buy a fuel-efficient car, but for any given price of gasoline, once you buy the fuel-efficient car, you have an incentive to drive it more miles than you drove your old gas guzzler. The “rebound effect” of more miles driven partly cancels out the decarbonization effect of buying the efficient vehicle.

The point is that even if you leave CAFE standards and similar command-and-control regulations in place, they will work better if you back them up with a carbon tax. Once the effectiveness of a tax became clear, there would be time enough to debate whether the original regulations could be phased out as redundant or modified to enhance the efficacy of the tax.

Communication issue: The analogy between wartime mobilization and climate action is misleading. A better analogy is that of a fair contest in which inventors, investors, and entrepreneurs compete for a prize that goes to whoever finds the most cost-effective way for people to enjoy modern life without contributing to climate change.

Economists are convinced that putting a price on carbon would be the best policy to fight climate change. We are frustrated when people who should be our natural allies prefer regulations and subsidies that, to us, are obviously less efficient and effective. But perhaps our very focus on efficiency is the explanation for our own ineffectiveness in the broader debate over climate policy.
Perhaps what we need is a better communication strategy. We should recognize that people are as concerned about distributional issues as about efficiency, and perhaps more concerned about politics than economics. We should recognize that we need policies that will be effective, but also policies that can be trusted. And we should be willing to consider second-best policies as a supplement to a carbon tax, or even designs where a carbon tax plays a supporting role. It may be that over time, increasing acceptance of an aggressive climate policy in general will encourage the development of mechanisms that look more and more like a carbon tax.

It is encouraging that Caratini’s and colleagues find evidence in the polling data from around the world that this may be the case. They find evidence that public opposition may not be persistent. Instead,

Voter aversion may abate once a policy is implemented, as people become more familiar with the measure and are better able to gauge its costs and benefits.

Based on a version previously posted at NiskanenCenter.com. Photo courtesy ofPixabay.com.