The Non Sequitur in Sanders' Case for Medicare for All 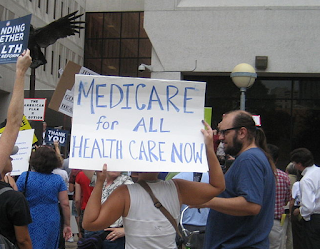 Lester, I find it hard to believe that every other major country on Earth, including my neighbor 50 miles north of me, Canada, somehow has figured out a way to provide health care to every man, woman, and child, and in most cases, they’re spending 50 percent per capita what we are spending.

Taken at face value, the statement is close enough to pass for true by the standards of contemporary political discourse. But as a defense of Medicare for All, it is a non sequitur.

The reason: No other major country offers a plan that is anything like Medicare for All.

Here is a chart, based on data from the Commonwealth Fund, that compares the United States with 10 other major countries in terms of heath care spending and health care performance. 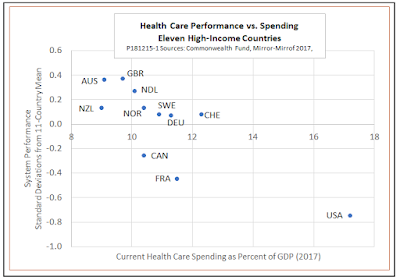 Yes, all countries shown have better health care outcomes than the United States, and all spend less (although more than half as much). But how closely do their health care systems resemble Medicare for All? How broad is their coverage? How centralized are they? What role do they assign to private insurance? What do they require by way of premiums and cost-sharing? Here are some answers, starting with the three top performers. (See here for the full health system profiles of each country.)

United Kingdom. The British National Health Service comes closer to being a “single payer” system than those of other countries, even though it is decentralized to a degree, with separate services for England, Scotland, Wales and Northern Ireland. Care is provided free at the point of service. The NHS covers all regular UK residents. But visitors and undocumented immigrants are eligible only for emergency services.

Government pays 79 percent of health care costs in the UK, more than the 49 percent in the United States but less than everything. Copayments are required for outpatient drugs, dental, and vision services, although these are waived for children, students, and people with low incomes. There is a small but thriving private health care system that caters to patients who prefer to seek care outside of the NHS. About 10 percent of the population carries private health insurance.

Australia. Health care in Australia is a three-way effort, with the national government providing most of the funding while state and local governments administer services. The three levels of government combined account for 68 percent of all health care spending. All citizens and permanent residents are covered, as well as citizens of a few other countries, by special agreement. Other than that, visitors and undocumented immigrants are not covered.

Hospital treatment is covered in full, but cost-sharing is required for prescription drugs, dental services, specialist visits, and some other services. Out-of-pocket spending for drugs is capped. Cost-sharing is waived for people with low incomes. About half of all Australians carry supplemental private health insurance to fill the gaps in the national system.

The Netherlands. Citizens and permanent residents of the Netherlands are covered through the compulsory purchase of private health insurance, which is heavily subsidized by the government. The government share of health spending is 77 percent. Visitors and undocumented immigrants, in most cases, are eligible only for emergency services.

The insurance industry is dominated by four closely regulated private companies. They must charge the same premiums to everyone regardless of health status, and are prevented from distributing profits to shareholders. Most people also purchase private supplemental insurance to cover additional benefits such as dental care, alternative medicine, physiotherapy, eyeglasses and lenses, contraceptives, and copayments for nongeneric drugs.

Other countries. The other countries shown in the chart use various combinations of the policies found in the UK, Australia, and the Netherlands. The government share of health spending varies from 64 percent in Switzerland to 85 percent in Germany.

Switzerland, like the Netherlands, follows the model of compulsory purchase of private insurance. Germany uses a unique system of independent, not-for-profit “sickness funds.” Public insurance is the predominant form of coverage elsewhere, with private supplemental insurance available for those who choose to use it.

Countries vary in the degree of cost sharing that they require. For example, Norway requires copayments for hospital services and doctor visits but Sweden does not. Canada has more limited coverage of prescription drugs than other countries. Vision and dental coverage, except for children, is limited everywhere. All countries have special provisions to cover health care costs of people with low incomes. None of the countries covered in the Commonwealth study offers full services for visitors and undocumented immigrants.

Comparison with Medicare for All. The other 10 countries in the Commonwealth study offer universal or near-universal health care, with full coverage for children and people with low incomes. However, they all differ from Sanders’ Medicare for All in important ways:

To insist on Medicare for All is not to learn those lessons, but to willfully ignore them.

Posted earlier at Medium.com. Follow this link for more on my thinking about health care reform. Photo credit: Cropped image courtesy of Infrogmation of New Orleans, via Wikimedia Commons.