Is the War on Poverty Really Over?

The Council of Economic Advisers recently released a report that began with the startling statement that the War on Poverty is over and has ended in victory. Properly measured, says the CEA, the poverty rate has fallen to just 3 percent.

Can such a low poverty rate, less than a quarter of the official measure (12.7 percent for 2017), be in any way credible? The answer turns out to be both “yes” and “no.”

There are, in fact, many different measures of the poverty rate. In addition to the official measure, the Census Bureau also publishes a modernized version called the Supplemental Poverty Measure, estimated at 13.97 percent for 2016. The Organization for Economic Cooperation and Development, a club of 36 middle- and high-income democratic countries, defines poverty as earning less than half of a country’s median income. By that definition, the U.S. poverty rate is 16.8 percent, the third highest in the OECD. Only Israel and Turkey have higher poverty rates.

The official U.S. poverty measure, was devised in the late 1950s. Its creators began by estimating the cost of a minimum healthy diet. They observed that poor families, on average, spent about a third of their income on food, so they estimated that an income equal to three times the cost of the minimum diet would be adequate to provide food plus other necessities. Income was defined as money income before taxes. That definition has remained unchanged over time except for adjustments for inflation.

Over the years, the official poverty level has been subject to many criticisms. Here are some of the most important:

1.      An accurate measure of poverty should use income after taxes, not before, in order to reflect both the burden of taxes paid and the benefits of tax credits received.
2.      An accurate measure of income should include the value of in-kind poverty programs, such as housing aid and SNAP (formerly food stamps).
3.      An accurate measure should take into account the way in which savings and ownership of real assets (such as cars and houses) affect the living standards of people with low current incomes.
4.      The data sources used to estimate the official rate undercount certain kinds of income.
5.      The standard consumer price index used to adjust the official poverty measure is an inaccurate measure of changes in the cost of living.
6.      More broadly, poverty should not be measured according to an absolute standard, such as the cost of purchasing a fixed basket of goods and services, but rather by a relative standard, such as half the median family income.

The 3 percent poverty rate cited by the CEA takes several of these points into account. It is based on research by Bruce D. Meyer of the University of Chicago and James X. Sullivan of Notre Dame. That research, which has been published in many well-regarded journals, focuses on the first five criticisms in the list. Their most recently released results are shown in the following chart. 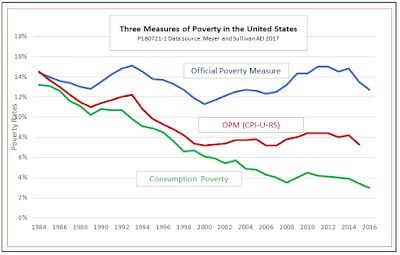 The top line in the figure shows the official poverty measure. After adjustment for changes in the standard consumer price index for urban consumers (CPI-U), the official rate has been essentially flat, with ups and downs over the business cycle, for half century.

The middle line in the chart recalculates the official poverty measure using a different version of the consumer price index known as CPI-U-RS but no other changes. CPI-U-RS is a research tool that attempts to reconstruct historical values of the consumer price index as they would look if the current methodology used by the Bureau of Labor Statistics had been used in earlier years.

Two methodological changes account for most of the difference between CPI-U and CPI-U-RS. Over time, BLS has improved the way it measures the impact of changes in the quality of goods like automobiles and consumer electronics. It has also changed the way it adjusts for changes over time in the content of the basket of goods purchased by the typical consumer. Taking these two changes into account, the standard CPI-U is estimated to have overstated increases in the cost of living by about 0.5 to 0.8 percentage points per year. That does not sound like much, but, as the chart shows, when those changes are applied year after year, they add up to a big difference in the estimated cost of living.

The lowest line in the chart shows Meyer and Sullivan’s own measure of poverty. It, too, uses the CPI-U-RS as a deflator, but it goes much farther than that. In an attempt to addresses the first three of the above-listed criticisms of the official rate, Meyer and Sullivan estimate poverty using data on consumption rather than income. That approach includes that consumer goods and services purchased with tax credits, such as the Earned Income Tax Credit, as well as goods and services obtained using SNAP debit cards or housing vouchers. Finally, using consumption data captures consumption goods that are purchased by drawing down savings and also the implicit consumption services from homes and cars that a family owns. All of those sources raise consumption but not its pretax income.

The switch from an income-based to a consumption-based poverty not only changes the poverty rate, but also who gets classified as poor. It does that by eliminating some people who have low incomes, but who would not normally be considered poor in any meaningful sense. For example, a consumption-based measure of poverty is less likely to count law or medical students who maintain an above-poverty standard of living by borrowing against the high earnings they expect in their careers. It is also be less likely to include retired couplse whose current income is low, but who live comfortably in houses they paid for during their working years, further supplementing their standard of living by drawing down savings or borrowing against home equity. As Meyer and Sullivan point out, those who are classified as poor by a consumption measure are more likely to be those who are truly desperate.

Changing the basis for measuring poverty would have most of these effects even if the data for both income and consumption were completely accurate. Meyer and Sullivan make the further contention that the income data are more likely to undercount resources available to the poor than consumption data. If so, that would make the gap between the official poverty measure and their own measure that much larger. It is worth noting, however, that not all researchers agree. Among the skeptics are Katheryn Edin and H. Luke Shaefer, authors of $2 a Day: Living on Almost Nothing in America. They summarize their doubts about the quality of the consumption data used by Meyer and Sullivan in this short blog post on their website.

Informative as it is, though, it would be wrong to treat the 3 percent rate as the definitive estimate of poverty, as the CEA report appears to do. It is not just that other methods of measurement come up with higher numbers, as we noted earlier. In addition, Meyer and Sullivan themselves make it clear that the poverty rate obtained using the consumption approach depends, among other things, on the year used to link their consumption measure to the official measure. They also note that the rate of consumption poverty, and its rate of decrease over time, depend on whether one uses an absolute or relative definition of poverty. Three percent should properly be viewed as the lower bound of a range of estimates that can be obtained using the consumption approach.

It is also important to point out that the reported decrease in consumption poverty does not mean that the War on Poverty is “over” in the sense that all but 3 percent of those who were previously poor have achieved self-sufficiency. On the contrary. The steady decline of consumption poverty that Meyer and Sullivan observe is, in large part, a result of the expansion of antipoverty programs, especially the Earned Income Tax Credit, SNAP, and Medicaid, the benefits of which are not picked up by the official measure. Other things being equal, cutting back on those programs would send a consumption-based measure of poverty rate back up again, despite the strong economy.

In short, the War on Poverty goes on. It is heartening to know that past efforts to aid the poor have not be entirely in vain, as one might pessimistically conclude from the persistently flat trend of the official poverty measure. However, many battles will yet have to be fought before America’s prosperity is shared by all of its citizens.

Reposted with permission from Medium