As the Fed hesitates over the pace of further monetary tightening, some critics say that standard unemployment data from the Bureau of Labor Statistics (BLS) overstate the strength of the recovery. By focusing on the number of employed as a percentage of the labor force, the critics say, the BLS ignores those who have dropped out of the labor force altogether. However, a little-watched indicator from the Richmond Fed, the Non-Employment Index (NEI), suggests that the critics are wrong.

The labor force, which forms the denominator of the standard unemployment rate (also known as U-3), consists of all persons who are working or have actively looked for work in the preceding month. People who want a job, but have stopped working, are omitted from both the numerator and denominator. In a typical month, there are millions of such labor force dropouts, even though they are not reflected in the standard statistics.

In an effort to take at least some of those labor-force drop-outs into account, the BLS publishes a supplementary index known as U-5, which includes discouraged and marginally attached workers in both its numerator and denominator. These groups include all those who want a job and have looked for one within the past year, but not within the past month. Discouraged workers cite their belief that there are no jobs to be found as their reason for not looking for work. Marginally attached workers give other reasons, such as family responsibilities. People who say they want a job but have gone longer than a year without looking for one are not counted in either U-3 or U-5.

Researchers at the Richmond Fed maintain that U-5 represents only a crude improvement over U-3. The problem, they say, is that neither of the official indexes takes into account the fact that different groups of workers have different rates of transition to employment from month to month. For example, about 28 percent of the short-term unemployed (those out of work for 26 or fewer weeks) find a job each month. At the other end of the spectrum, the transition rate for people who report that they are retired and do not want a job is just 1.4 percent.

Interestingly, transition rates do not differ much for other groups of workers. Among people who want a job but do not have one, transition rates run between 12 and 15 percent. The long-term unemployed (out of work more than 26 weeks but continually looking), discouraged and marginally attached workers, and people who are not looking at all but still say they want a job all fall in that range of transition rates.

According to research first published by Richmond Fed economist Andreas Hornstein, San Francisco Fed economist Marianna Kudlyak, and McGill University economist Fabian Lange, transition rates are the key to constructing a more accurate labor market index. Rather than arbitrarily including or excluding certain groups, as the BLS does, they construct an index that includes everyone, but weights their importance according to each group’s transition rate. In the resulting non-employment index, for example, each short-term unemployed person (transition rate of 28 percent) gets twice the weight of someone who is not looking for work at all but claims to want a job (transition rate of 14 percent).

The following chart shows the three indexes, the standard U-3, the supplementary U-5, and the non-employment index, side by side. U-3 and U-5 vary much more than the NEI over the course of a business cycle, because they exaggerate the effect of movements from, say, long-term unemployment to discouraged worker status, or from marginally-attached to out of the labor force. The NEI more accurately accounts for importance that workers outside the standard measure play as a reserve of available labor. 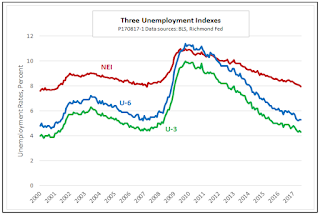 Note that all three indexes have now returned to their pre-recession lows. The implication is that there is little merit in the contention that official unemployment measures overstate the recovery of the labor market. The Fed should not worry about that issue. There is no more hidden slack in the labor market now than there was before the Great Recession began.

Reposted with permission from TalkMarkets
Posted by Ed Dolan at 7:47 AM