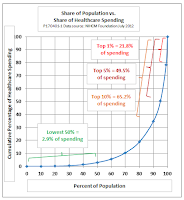 Senate Republicans fell short in their first attempt to attract fifty votes for their healthcare bill. Small wonder. The Better Care Reconciliation Act (BCRA), as it is called, is remarkable in many ways, but perhaps remarkably of all, it fails  to draw on a large body of conservative reform proposals. As a result, it gives the false impression that only liberals have given any thought to how to design a fair and efficient healthcare system.

Now the Senate’s Republican leaders have a second chance. Instead of rushing something out that isn't much of an improvement, they could use the extra two weeks they’ve given themselves in August for open hearings on healthcare reform. If they did so, they would have a chance to hear day after day of testimony from conservative scholars and policymakers. Here are some key points that testimony would make, if it had a chance to be heard.

Some of that testimony would focus on the top end of the spending curve. As the chart below shows (based on data from the National Institute for Health Care Management Foundation), just 1 percent of the population accounts for 20 percent of all personal healthcare spending, and the top 5 percent of population for half of all spending. Many people in that range suffer from one or more chronic conditions like diabetes, kidney failure, or AIDS that require expensive treatment year after year. Their medical needs are literally uninsurable by traditional standards. They are not just at high risk of needing care, they are certain to need it. And even if an insurer could be persuaded to cover them, an actuarially fair premium would exceed the annual income of all but the very wealthiest among the
chronically ill. 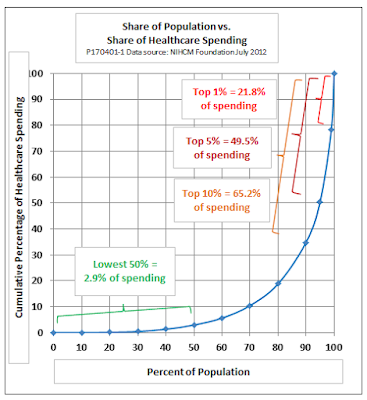 Conservatives policy experts have made some very reasonable proposals for dealing with those at the top of the cost curve. One of the most attractive is Universal catastrophic coverage (UCC). UCC would cover the top-of-the curve healthcare needs of all Americans, subject to a deductible that limited out-of-pocket expenses to a substantial, but not impossibly high, percentage of their income.
Universal catastrophic coverage has an impeccable conservative pedigree. It was proposed back in the 1970s by Martin Feldstein, who would go on to serve as Ronald Reagan’s chief economic adviser. In 2004, Milton Friedman, then a Fellow at the Hoover Institution, endorsed the concept. An up-to-date version, specifically designed to address the problems of the ACA, is outlined by Kip Hagopian and Dana Goldman in National Affairs,

The exact parameters of the program would be subject to negotiation, but, for the sake of discussion, suppose the deductible were set at 10 percent of the amount by which a household’s income exceeds the Medicaid eligibility level, now about $40,000 for a family of four. Under that formula, a middle-class family earning $85,000 a year would face a deductible of $4,500 per family member, with a cap of twice that amount for households of more than two people. By the same formula, the deductible for a household with a million dollars of income would be $96,000.

The high-deductible policy might be provided directly by the government, as an extension of Medicare. Instead, following the Swiss example, people could choose among private insurers offering policies meeting the program’s standards. In that case, UCC would resemble an expanded version of Medicare Advantage—originally a Republican idea that now enjoys bipartisan support.

People could choose among several ways to meet their out-of-pocket costs. As explained, for middle-class families, out-of-pocket costs would be comparable to those now faced under individual policies purchased on ACA exchanges, while for high-income families, they would be substantially higher.
One option would be to buy supplemental insurance to cover all or part of the UCC deductible. Such supplemental coverage would cost far less than policies now sold in the market for individual insurance, since the UCC deductible would set an automatic ceiling on claims for which the insurer would be responsible. Alternatively, people could pay out-of-pocket expenses from funds accumulated in a tax-deductible health savings account, yet another conservative idea, and one that is already on the books.

Very likely, many middle-income families would decide simply to cover all of their routine healthcare costs out of pocket. After all, as the chart shows, the healthiest 50 percent of the population account for less than 3 percent of all personal healthcare spending, and the next 20 percent of the population for only another 7 percent of spending. People on the bottom half of the spending curve could reasonably pay their routine healthcare costs in cash, as they now pay for oil changes or wiper blades for their cars.

Fiscal conservatives might, quite properly, ask how UCC could be financed. A large chunk of it could be paid for with another proposal favored by many on the political right — abolishing the tax deductibility of employer-sponsored insurance (ESI), which currently costs the federal budget an estimated $235 billion per year. That oddity of the U.S. healthcare system is a holdover from World War II, when employers lavished in-kind benefits on scarce workers to evade wartime wage controls. Both its liberal and conservative critics say it is long overdue for repeal.

Liberals object to employer sponsored insurance because it is inequitable. Suppose the cost of health insurance to your employer is $10,000 per employee. If that were taxed as ordinary income, you would pay more tax, but just how much more depends on your tax bracket. If your taxable income is $200,000 a year, putting you in the 33 percent bracket, the exclusion saves you $3,300. If you earn $35,000 a year, in the 15 percent bracket, the exclusion saves you just $1,500 per year. The inequity is even greater for minimum-wage workers. Higher-paid workers or their or their unions often negotiate compensation packages that take advantage of the tax deduction by slowing the growth of cash wages while increasing the share of health benefits. However, for workers who are already at the minimum wage there is no room for negotiation. Wages for such workers cannot be cut and must rise when the legal minimum increases. As a result, the entire cost of ESI falls on employers. That is one reason why minimum wage jobs are less likely to include health benefits.

Conservatives have other objections. For one, employer-sponsored insurance imposes disproportionately large administrative burdens on small businesses, which, unlike large corporations, cannot afford to self-insure. Furthermore, ESI produces job-lock. Workers who have jobs with good insurance fear to leave them for jobs elsewhere that would make better use of their skills, but might not have the same health benefits. Quitting a job with ESI to work as an independent contractor or start a small business of one’s own is even riskier.

The BCRA, like the House bill, takes a baby step in the right direction by lifting the employer mandate that makes ESI compulsory for firms with fifty or more workers. However, as long as the tax preference remains in place, workers and many employers still have an incentive to stick with employer-subsidized insurance, shifting part of its cost to other taxpayers, low-wage workers, the self-employed, and would-be entrepreneurs.

And what about the poor? Liberal critics look at the way the BCRA slashes Medicaid and conclude that Republicans simply don’t care whether the poor have access to health care or not. Maybe that is true for some, but not all. Medicaid is not the only way to provide healthcare for people with low incomes.

For example, the Hagopian-Goldman variant of universal catastrophic coverage could be implemented in a way that would render Medicaid unnecessary. Suppose, as in our earlier example, the UCC deductible is set at 10 percent of the amount by which household income exceeds $40,000, roughly the Medicaid threshold for a family of four. The deductible for families below the threshold would then fall to zero. They would get first dollar coverage from their UCC policy, so there would be no need for Medicaid as a separate program. Such a scheme would also increase work incentives for low-income households, who would no longer have to worry that extra earnings would cause them to lose Medicaid benefits.

We haven’t even touched yet on measures to control cost. As everyone knows, medical services, from cancer drugs to bags of saline solution to hospital stays cost more in the United States than anywhere else. Conservative policy experts have many ideas for cutting costs without cutting quality of service.
Encouraging greater price transparency is one such idea. A report from the Commonwealth Fund notes that health care is unlike any other market. Patients rarely know what they'll pay for services until they've received them; health care providers bill different parties different prices for the same services, and privately insured patients pay more to subsidize the shortfalls left by uninsured patients. Prices for the same service vary widely, even though there is little evidence that higher prices are linked to higher quality. Already, some thirty states that have policies to encourage more transparent pricing, although those policies are not uniformly effective. Recently, Representatives Michael Burgess (R-TX), MD, and Gene Green (D-TX)  introduced legislation at the federal level to promote greater price transparency.

There is some evidence that consumers have not always made use of healthcare price information even when it has been available. That is understandable at a time when most people received coverage through their employers that had only modest deductible and co-pays. However, that seems already to be changing as employers are imposing greater out-of-pocket costs on ESI beneficiaries. A system that introduced universal catastrophic coverage and replaced ESI with individual tax credits and health savings accounts would encourage greater use of comparative price information if it were available.

Transparency is not the only cost-saving reform backed by conservatives. They also favor more competition among hospitals and physician groups, tort reform to control the high cost of malpractice insurance, and allowing small businesses to form groups to buy health insurance, and more. Often conservative cost-cutting ideas are the same as those advanced by liberals. Last year, polar opposites Senators Ted Cruz and Bernie Sanders co-sponsored a bill that would have allowed Americans to import cheaper drugs from Canada. Why were none of these ideas included in the BRCA, or even openly discussed as the bill was being formulated?

A word of caution. No one of these conservative ideas for health reform is a magic bullet. Even among conservative, each has critics as well as supporters. Liberal reformers have ideas of their own that many people like even better, ranging from sweeping measures like Sen. Sanders’ Medicare for All to small tweaks in procedures for approving new drugs. Still, the conservative ideas cited here are serious proposals with backing from reputable scholars and policymakers. The scandal is that the secretive process by which the BCRA was drafted did not even consider them. Really, is it too harsh to say that the Better Care Reconciliation Act is not about better care at all?