Congress will soon start debating the federal budget for the 2018 fiscal year. As the following figure shows, the Congressional Budget Office projects that after shrinking for several years, the budget gap will soon begin to widen if there are no changes in current policy. Crop insurance is one of several farm programs in the crosshairs of Congressional budget hawks who hope to keep that from happening. 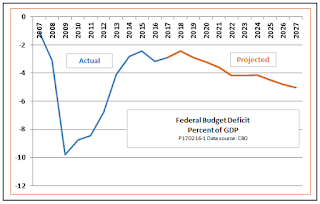 Crop insurance may seem like small change compared to massive programs like health insurance subsidies under the Affordable Care Act, but critics have long targeted it as wasteful. The Heritage Foundation, a consistent ally of budget cutters, characterizes crop insurance, along with other farm subsidy programs, as “a massive transfer of wealth from taxpayers to mostly large agribusinesses that are (or should be) fully capable of managing their business operations without this special treatment.”

The problem begins with the very name of the program. For several reasons, the risks that crop insurance protects against, which include both low crop yields and low prices, are not truly insurable, as I explained in  this previous post. First, they are not truly fortuitous. Rather than being random events outside the control of the insured party, losses depend on choices of crops and growing methods. Second, the covered hazards are not pure losses. Instead, farming is an ordinary business activity that entails the possibility of profit as well as loss, in contrast to insurable risks like fire or theft, which have no upside. Third, premiums for crop loss insurance would not be affordable without federal subsidies. The government currently pays 60 percent of the premiums for crop insurance, and in addition, subsidizes the administrative expenses of the companies that provide the coverage.

In short, critics say, the program is just one more federal subsidy, masquerading as insurance.

A recent report from the CBO includes crop insurance as Number four on a list of one-hundred and fifteen options for cutting the federal deficit. In its current form, the program costs the federal government a little over $8 billion per year. The CBO report estimates that relatively modest reforms to the program, including a reduction of premium support from 60 percent to 40 percent and a reduction in reimbursements for the administrative expenses of insurers, would save more than a third of that amount, as shown in the next chart. Such reforms would represent a compromise between the farm-state backers of crop insurance and its most severe critics, who would like to see the program abolished altogether. 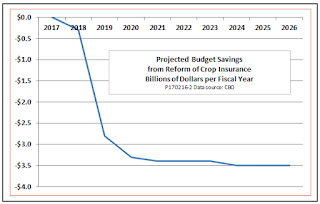 The CBO notes that there is a possible downside to the proposed reform. If higher premiums caused farmers to withdraw from the program, Congress might resort to ad hoc disaster assistance to reimburse losses. Such programs cost an average of $700 million per year in the early 2000s. However, the CBO thinks that withdrawals from the program would not be widespread, in part because lenders often insist that farm borrowers purchase crop insurance to strengthen their ability to repay loans.