As US Growth Slows in Q4, Inflation Turns Negative 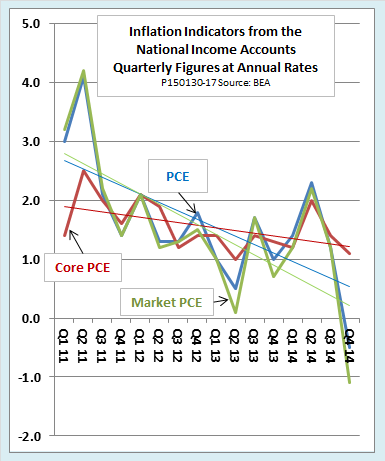 The Bureau of Economic Analysis reported today that the growth rate of real GDP slowed to anannual rate of 2.6 percent in the fourth quarter of 2014. That is barely half of the 5 percent rate reported for the third quarter, but still a bit above the 2.4 percent average growth rate since the recovery began in mid-2009. Today’s advance estimate is based on preliminary data and is subject to revision. The average revision from the advance to the third estimate, without regard to sign, is 0.6 percentage points.
Today’s release from the BEA includes a set of inflation estimates that are based on data from the national income accounts and thus represent an independent check on the more widely reported consumer price index compiled by the Bureau of Labor Statistics. The most closely watched of the BEA’s inflation indicators is the index for personal consumption expenditures (PCE index), which is used by the Federal Reserve as a guide to monetary policy. The PCE index decreased at a -0.5 percent annual rate in the quarter, putting it far below the Fed’s official target of +2 percent. A supplementary market-based version of the PCE index fell even more rapidly, at -1.1 percent. The market-based index excludes financial services and other items for which there are no observable market prices. >>>Read more

Follow this link to view or download a slideshow with additional charts from the latest GDP report
Posted by Ed Dolan at 8:45 AM