The Opportunity Cost of Driving Your Car Has Never Been Lower 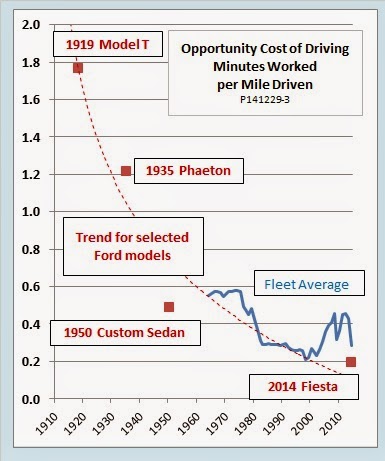 In August, I posted an item showing how many miles you could drive your car on an hour’s wages. At that time, the average US price for gasoline was $3.60 per hour. Based on an average wage for production and nonsupervisory workers of $20.61 per hour and an average fleet economy of 24.3 miles per gallon, it turned out that an hour’s wages would buy you enough gas to drive 139 miles.

That was a lot better than the “good ol’ days.” Back in the time of the Model T (17 mpg), a production worker earning 50 cents an hour could buy just 2 gallons of gasoline, enough for a pitiful 34 miles. By the depths of the Great Depression, that had crept up to 49 miles, mainly because gas was cheaper. A post-WWII Ford got even worse mileage than a Model T, but wages were up, so miles driven per hour worked had risen to 123. Miles driven per hour worked peaked at 284 in 1998, but after that, rising gasoline prices and stagnant wages sent the cost of driving up again.

Until now. Over the past several months, the price of regular grade gasoline has plummeted to $2.40 per gallon, according to government data for the week ending December 22. That puts the fleet average at 209 miles per gallon and rising. However, the fleet average includes all cars on the road—not just new models. Even if you don’t drive an electric or a hybrid, you can do a lot better than 24.3 miles per gallon if you drive the best of today's technology. Earlier this year I bought a peppy little Ford Fiesta with a high-tech, 3 cylinder, 1 liter, supercharged gasoline engine. The EPA rates it at 36 miles per gallon, although it does quite a bit better than that for me. At $2.40 per gallon, the average wage would buy you enough gas to drive the Fiesta 311 miles, an all-time record.

Here’s a new version of my chart. This time, just for variety, I’ve inverted the vertical axis to show minutes worked per mile driven, rather than miles driven per hour worked. Take a look at that trend line for selected Ford models, and get ready to hit the road. It’s never been cheaper!