Is Financial Reform Working or Will It Make Things Worse?

The 2008 financial crash gave rise to a world-wide call for a review of regulations. In the United States, the EU, and international forums like the Basel Committee on Bank Supervision, the conclusion was reached that regulators had allowed banks and other financial institutions to take risks well in excess of those justified by the public interest. Legislatures were brought into the act where needed to change the regulatory framework. Everyone vowed to fix things.

Now, with some of the key pieces finalized on paper, but not fully implemented, financial reform is running into a backlash. Skeptics, including former Fed Chairman Alan Greenspan, who expressed his misgivings recently in the Financial Times, argue that reform efforts not only will not work, but are making things worse. Others, like U.S. Representative Barney Frank, co-sponsor of the 2010 Dodd-Frank financial reform act, strongly disagree. In a reply to Greenspan, Frank argued that the financial system can be made safer while still leaving it able to perform its essential economic functions. Who is right? 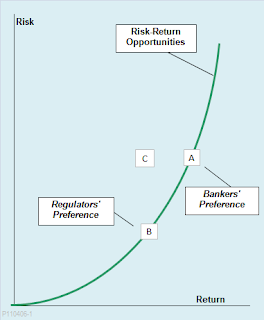 I find it helpful to frame the discussion in terms of a simple risk-return diagram like the one shown here. Financial markets, by their nature, present banks and other institutions with a trade-off between risk and return. Financial managers move up and to the right along the frontier until they reach a preferred point, say point A, beyond which they judge that any additional increase return not is not worth the extra added risk.

Regulators tend to be more cautious. They would prefer to see banks operate at a lower point along the risk-return frontier, say, point B. There are three main reasons why regulators think financial managers, left to their own devices, tend to take risks greater than are justified by the public interest:
The fundamental dilemma of financial regulation is that attempts to move the system down along the risk-return frontier from A toward B can have unintended consequences that move it, instead, to a point  inside the frontier, like point C. Such a point is inferior both from everyone's point of view. It has the high risks that the regulators would like to avoid without the high returns that the bankers seek.

This framework helps us refine the question of whether financial reform will make things better or worse. We need to ask which elements of the post-2008 round of reforms are likely to produce the desired effect of moving from A toward B, and which are in danger of producing unintended consequences like a move from A to C.

The kinds of regulations most likely to fail are those that prohibit specific activities. The Dodd-Frank financial reform act includes a number of these, for example, restrictions on proprietary trading and use of derivatives. The problem is that they take out specific items from the mix of activities that bankers formerly judged to offer the most attractive risk-return profile without curbing the underlying appetite for risk.

There is no reason to think that bankers, faced with, say, a prohibition on derivatives, would simply replace them with safe government bonds. Instead, they would turn to activities that they passed over before, either because  they were riskier ways to earn the same returns, or offered less return for the same risk. To put it in terms of our diagram, instead of responding to the prohibitions by moving along the curve from A toward B, they would be motivated to move up and to the left from point A, hoping to end up at a second-best point a little northeast of point C. But if that happened everyone would be worse off.

When it comes to regulations that prohibit specific risky activities, then, Greenspan may well be right. It is like parents telling their overweight kids, "Don't eat ice cream, don't eat pizza." Little Jimmy and Jenny just replace their favorite fatty foods with second-favorites, like Twinkies or Big Macs or something even more disgusting that their poor parents didn't even know existed.

The prohibitions in Dodd-Frank are not the only reforms that can produce unintended consequences. For another example, consider the increased capital requirements mandated by the Basel III agreements that were finalized late last year. The thinking behind Basel III is of course correct to the extent that, other things being equal, increasing a bank's capital will tend to move it down and to the left along the risk-return frontier. But will other things remain equal? If they are forced to maintain more capital, what is to keep bankers from clawing their way back toward their preferred risk-return point by acquiring riskier assets, or choosing riskier funding alternatives, or engaging in risky operations that don't show up on their balance sheets at all?

The members of the Basel Committee on Bank Supervision are well aware of that problem. They have tried to deal with it by defining capital more strictly than in the past, by using risk-weighting to require banks that hold low-quality assets to hold more capital, by issuing a separate set of regulations dealing with liquidity risk, and by paying more attention to off-balance sheet risks. Still, Basel III is, at its core, not that much different from a parental ice-cream-and-pizza list. The Basel III list is longer and more comprehensive, but we can be pretty sure that devious financial engineers will figure out new ways to subvert its intention.

Does that mean nothing can or should be done? Not really. Greenspan is far too complacent in assuring us that if bankers continue to operate at their preferred point of high risks and high returns, all will be well "with notably rare exceptions." Those rare exceptions are the tsunamis and meltdowns of the financial world that we should be most worried about. They are exactly what provide the motivation for financial reform in the first place.

It seems to me that the elements of  financial reform that are most likely to work are those that eschew the ice-cream-and-pizza approach in favor of directly attacking the underlying causes of excessive risk taking: contagion, moral hazard, and agency problems. Dodd-Frank, Basel III, and financial reform measures in other countries do include some measures of this kind, although not enough. For example:
The bottom line? Financial reforms undertaken since 2008, including Dodd-Frank and Basel III, contain some promising elements and some that are likely to disappoint. How well they will work depends to a large extent on how well they are implemented. And that is where we come to the darkest cloud on the horizon right now, which lies not in the unintended consequences of reform, but in the unintended consequences of the backlash against it.

The worst of all possible worlds would be to enact complex new regulations and then starve regulators of the funds they need to work out key operational details or provide consistent enforcement. Doing so would impose heavy compliance burdens on financial institutions and subject them to great legal uncertainties, while doing little to reduce systemic risk. Unfortunately, the current efforts by some in Congress to starve the Securities and Exchange Commission, the new Consumer Financial Protection Bureau, and other regulators of the funds and leadership they need to do their jobs may lead to just such an outcome.

Follow this link to view or download an updated slideshow discussing Dodd-Frank, Basel III, and other elements of financial reform.